Kingsland may still have many similar physical characteristics as the 1950s, i.e. the old housing, shops etc. Whereas today it is a sought-after place to live and has expensive real estate, in the 1950s it was regarded as one of the poorest parts of Auckland. We lived in a street called Hesketh Street which ran down into Newton Gully. Newton Gully was a kind of neglected wilderness that ran all the way to Western Springs from up by Newton Road.
Weekends and other spare time were spent in a feral fashion getting up to all sorts in The Gully. Most kids belonged to loosely formed gangs and I can recall spending lots of time making weapons of one kind or another; bows, arrows with slate heads, 'shanghais’ that fired staples and ball bearings, spears, boomerangs, and of course BBguns.
Another regular attraction was going to the Royal Picture Theatre each Saturday. We seemed to be more interested in the regular ‘shorts’ such as The Lone Star Ranger,
Tarzan etc. and jaffa throwing battles than the main feature. I seem to have also been involved in work from an early age, i.e. a Star boy. The Auckland Star paid kids to deliver their daily paper. Either that or I washed vegetables; at the local Indian vegetable shop for one shilling per sack. A shilling could buy lots of treats like lollies, ice creams, drinks etc.
I liked rugby league and played for Arch Hill and Mt Albert clubs for several years. Mt Albert were based at Fowlds Park. I usually spent after school and weekends down at the park practising goal kicking (Dan Carter had nothing to worry about).
Travelling was usually done on foot or catching a train. When with friends, the plan was to try and outwit the conductor by getting off at one end before they arrived to collect the fare. Then rushing the length of the stationary train to try and get on at the front again. (Kids occasionally did dishonest things as still happens today)
Generalising greatly, I think that neighbours were more supportive of each other in the 1950s. That is, we had more contact and communication. A feature of the 1950s in Kingsland was the existence of a local cop who would support parents in the admonishing of kids when things were getting a bit out of hand.
Speaking of getting out of hand, reminds me of our trip to Mt Eden tip. A favourite pastime was walking up to the tip at the base of Mt Eden in Normanby Road that contained uckland’s rubbish. We discovered that the Colonial Ammunition Company (CAC) dumped their damaged products there, so we had a great time collecting cartridges from .22, 303 and shotguns. We then devised ways to get the gun powder out of them to try and make our own explosions.
On a more sedate note, one of my warmest memories is going to Stormonts Bakery (Tip Top) as they were taking the hot bread out of the oven. Buying a loaf and just about hollowing it out before getting it ‘safely’ back home.
Finally, a memory stands out is me sitting on the Rocky Nook Bowling Club wall at the top of King Street and waving to the Queen as she was driven passed (Royal Visit to Auckland December 1953.) To my surprise, she waved back. (The End)
Sidney Neil, Auckland, September 2012
Illustration from The Kingsland Kid, Ann Macrae, 2003 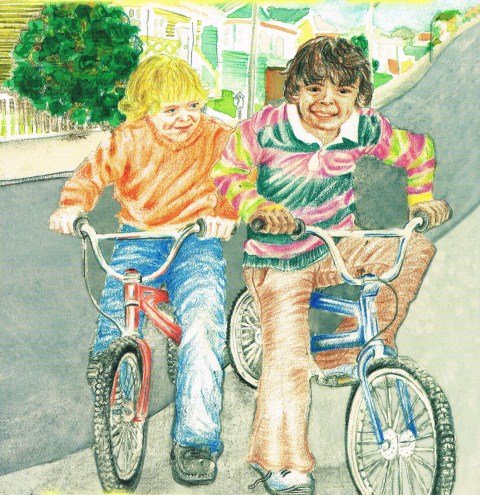