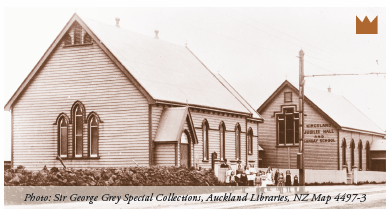 In the time of Apihai Te Kawau, a Maori track extended along the ridge between Newton Gully, now the Western Motorway, and Cabbage Tree Swamp, now Eden Park and surrounds, to the fishing grounds of the Whau. As settlers arrived, this track became Whau Road around 1845 and New North Road around 1865. The first church in the area, a rough scoria Wesleyan chapel built in 1853, was replaced in 1858 by a wooden
building that also served as a schoolroom and public hall. The existing timber church was built in 1897 and the Jubilee Hall in 1909.